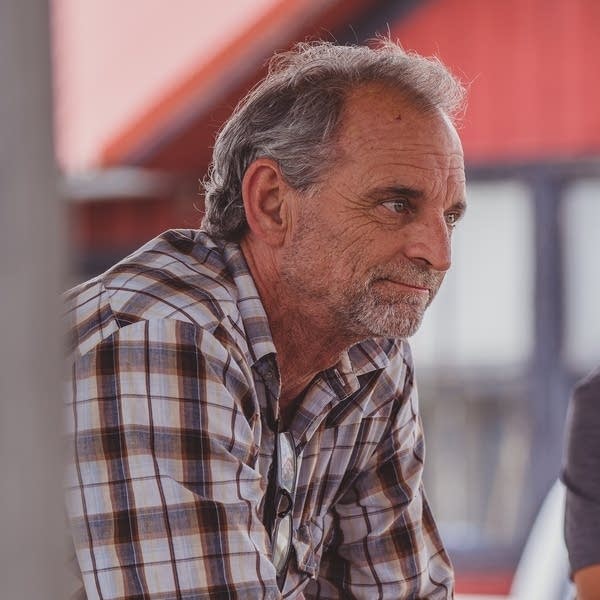 There’s a reason Dr. Rick Haney is known as “the legend” in sustainable ag circles. The soil health test he developed helped farmers get a true picture of what was going on beneath the surface. Mimicking Mother Nature, Dr. Haney’s test uses water extraction to figure out what nutrients are available in the soil. Over time, the test can help farmers pinpoint problem areas, choose cover crops and cut back on fertilizer.

Field Work: Tell me how this test came about for you.

Rick Haney: It came about through a small series of epiphanies and the number one epiphany was that soil is alive. It's very important because the way you treat something that's alive is  very, very different than how you treat something that is static or dead. The microbes in the soil that make the system go take in oxygen just like we do, and give off CO2. And that's how we can capture that CO2 and measure how active they are.

Field Work: What year was that?

Rick Haney: That was in graduate school in 1996. It wasn't ‘til about 2008 that it all came together. There was an instrument that evolved, that measured carbon and nitrogen at the same time. And that showed up about 2010. I was like, oh, my God, I can use that. And then the whole thing really kind of came together. So the Haney test is like five or six, seven different tests. And we integrate all that information together to try to see a picture. The biggest difference is that we're trying to get the soil to talk to us instead of trying to get it in the lab and beat the information out of it. It's a more passive approach and I think a more accurate approach.

Field Work: To what end were you looking at living biology? What problem were you trying to solve?

Rick Haney: I worked for farmers for a long time when I was younger. They don't really have control of their commodities. They don't have control over seed cost or equipment cost or any of that stuff. But the one thing that they can decide every year is how much fertilizer to put on.  That is still within their grasp. And so we were trying to show that; A, the soil is alive; and B, their soil is going to naturally give you some nitrogen, phosphorus and potassium fertilizer for free. And we should be accounting for that. So you don't have to spend quite so much on fertilizer. The test was originally developed to hopefully sustain yields and cut back on fertilizer because we were way over on fertilizer.

Field Work: How much has the series of tests changed over time? What's different from what you initially were doing?

Rick Haney: It hasn't changed all that much because the principles are pretty basic. We developed some more sensitive instruments. My extract is based on what a plant root does. Plant roots will make and drop organic acids out their roots to solubilize nutrients around the root zone. And so we made an extract that mimics that. It took about four iterations to get it where it needed to be. But we got it there.

Field Work: How much resistance do you encounter with these concepts? Are farmers  coming along on it?

Rick Haney: There's been an enormous amount of resistance. It's like you've got a battleship in the harbor and you're trying to turn it with a rowboat. You're not carrying a rotary dial phone in your pocket. Technology advances. Our understanding and our soil testing methods were made in the ‘50s and ‘60s and ‘70s. Come on now. It's about the only thing that hasn't changed. And so we’re trying to drag soil testing into the 21st century. We're just at the beginning of new understanding. I'd say in the last five or six years, [farmers are] starting to come along.

Rick Haney: Yeah, it's principally row crop, I'd say, but [the test] is very versatile because it measures fundamental things in a soil. So it doesn't really matter if it's a range or a pasture or native range or row crop or gardens or vegetables. It's applicable to about anywhere that has soil.

Field Work: We’re talking about carbon markets now but we hear the bigger impacts of all these [regenerative] practices would be on water more so than on carbon. Would you agree with that?

Rick Haney: Oh, yeah. Yeah. Water is huge. I mean, no till  cover crop fields, even our conventional till cover crop fields at the research station are right next to conventionally tilled fields. And we'd get a three or four inch rain and nothing runs off our fields. And I mean, it's just a river coming off the other field. So if you can't get the water in the soil, you know, that's a red flag. Somebody's trying to tell you something. And so that's very important. If we want to have clean water in the future, we have to have healthy soil above it.

Field Work: Within USDA, how receptive have people been to your ideas?

Rick Haney: A lot of the scientists were against it because it's so different and may have stepped on some of their research. And that's fine. I understand that. But the farmers treated it the same way. You can't do that. It was just pretty much universally ‘you can't do that.’ Ended up USDA gave me several awards, all  within two years. I got the secretary's Honor Awards from the secretary of agriculture a couple of years ago because of the soil  test. So, you know, they're starting to see that maybe this is going to help and be a little bit different. It's nature's test. They just associated my name with it, you know.  I called it the soil health nutrient tool.  I never called it The Haney Test. And it's weird for me to say it even now. It's been quite a journey. And, you know, I'm very pleased and was glad to be a part of the whole thing.

Field Work: Tell me just exactly how it works, what you're measuring, how long it takes and what the costs are.

Rick Haney: It's $50 a sample and most people balk at that. But we're going to give you here's how much N P and  K  is in your soil right now. This is what it’s worth. We give you a dollar figure. And so you can use a fertilizer calculator to maybe reduce your fertilizer rate a little bit based on this test. And then you’ve got the soil health parameters. Here’s your food source. This is how active the microbes are on your food source. And here's the balance of your food source. So we have all these integrated indicators and then we give you a soil health score to kind of show you where you're at. And what we really try to emphasize is this is not a competition between you and your neighbor. This is a competition between you and yourself. So a lot of times we would suggest that farmers take a sample from their field, a composite sample, and then go to their fence row and take another composite sample because you're not farming that. And there's your benchmark. Because it's your climate, your geography, your soil that you're not farming. So it's a real nice comparison between if you really want to know where you're at in your soil and in your journey. And, you know, if you need something to measure against, that's a fun way to do it. So it is a reflection not only of that point in time, but of your management and what got you here. If you look at fields that are side by side and what's been conventionally tilled, monocropped, monoculture. And the field next door had crop rotation, cover crops and no tail. You're going to see a big difference in scores, a big difference in nutrient availability and all that, even though it's at one point in time. That change is real and we can pick that up. And if you start down the journey of soil health, you can track over the years of how you're changing it and it helps farmers give them a little inspiration. Hey, these indicators are starting to move in the right direction, And so that gives them the courage. We were trying in the beginning to give farmers the courage to back off their fertilizer just a little bit, 10, 20 percent. You can back that off and feel comfortable.

Field Work: For all the times we've referenced your test on the podcast, I don’t think we've what people do who want to use it.

Rick Haney: It's out there. There's some new labs that are running it. You just need to pull the soil samples and send them to whatever lab and you can find it.