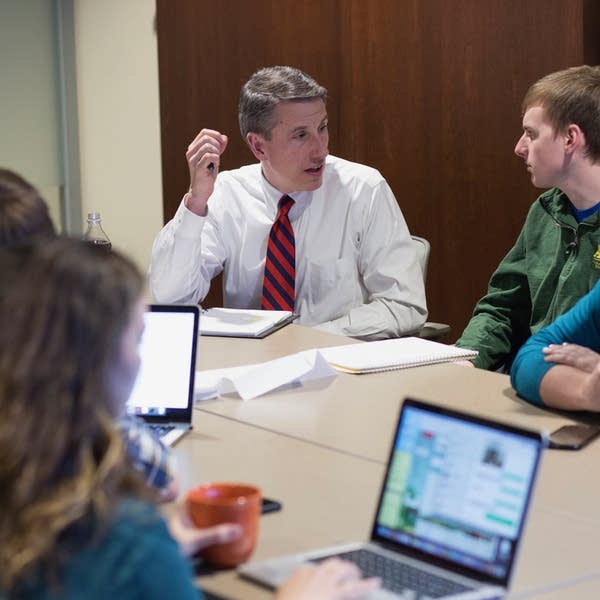 For the past several years, Iowa State University Professor Kevin Kimle has been asking students in his ag entrepreneurship classes to take a personality test. What he’s found so far is that compared to the average person, those ag students score pretty low when it comes to openness. That’s striking because the test associates openness with entrepreneurship. Kimle and the Field Work hosts talk about what that lack of openness might mean for trying new practices like cover crops. And after taking the personality test, Zach and Mitchell learn some awkward things about themselves.

Kimle uses the Big Five Aspects Scale with his ag entrepreneurship students to launch discussions about innovation, what traits might lead someone to start a new business, and how those things sit within agriculture. The test measures extroversion, neuroticism, agreeableness, conscientiousness, and openness to experience.

“It's oversimplifying to break it to five basic components,” Kimle said, “but it's still helpful.” Field Work host Mitchell Hora, who turned to Kimle for some assistance while launching Continuum Ag, scored high on extroversion, which did not surprise him.

Zach Johnson, who in addition to hosting Field Work and farming runs a successful social media brand with two YouTube channels, discovered the test identified him as lacking compassion.

“I take enormous pride in working myself to death,” he said, “and judging you because you refuse to hold yourself to the same standards.”

The test results are not always spot-on.

“Human beings are the most complex thing in the universe,” Kimle said. “And so breaking a person into five different parts is a gross simplification.” What’s more, he’s not suggesting that students should abandon their entrepreneurial dreams if they don’t test in alignment with traits sometimes correlated with successful business founders. Rather, he said, it can give them information about who to look for as partners or employees.

“From an entrepreneurial perspective, what sort of personalities would be complementary to mine, as I think about building a team?” High scores on extroversion and openness to experience and low scores on agreeableness seem to correlate with entrepreneurial inclinations, Kimle said. Hora and Johnson fit the profile.

“You're a disagreeable couple of folks,” Kimle joked.

But what about all the people in Washington County who have been pioneering conservation for decades (and who’ve been featured in this miniseries from the Field Work podcast)? Field Work asked a couple of them to take the test.

When Johnson looked at the results, he said they didn’t align with what the test suggested would make a person more likely to try something new. “These results sort of give me more hope for all the other counties out there — like the ones in west central Minnesota,” Johnson said.

That’s because the test didn’t show Washington County farmers were any more anything than anyone else.

Kimle said innovation in agriculture does have challenges that some other industries don’t, such as the fact that each iteration of a test typically takes at least a year and results depend on numerous factors outside the farmer’s (or entrepreneur’s) control.

“You can do everything right, as everybody in agriculture knows, and you can still not do well,” he said, which makes dealing with the aftermath of unfortunate events part and parcel of farming. That reality, combined with the natural human instinct to want to fit in and the life-in-a-fishbowl feeling for many rural residents, can combine to discourage people from trying something that might make them stand out.

“Nothing is punished in small towns like success,” Kimle said.

Conversely, the culture of agriculture, especially in Washington County, often includes a determination to make something work. Hora said that’s where he sees common traits among his neighbors and the elders of his county.

“That bullheadedness,” he said. “The farmers in Washington County said, ‘We see that there's a different way of doing things and we're going to make it work here.’” With many farmers working together, there was shared interest and determination and less likelihood of being alienated for being different.

So while the personality test did not profile the farmers most likely to adopt conservation or the students best suited to starting a business, the explorations of different personalities helped Field Work see that with creativity, innovation, role models and ambitious young people coming up, there’s plenty of opportunity to expand conservation. But it’s probably going to take a lot more deliberate effort.

“Can we help make our industry a more friendly place for people that want to try new things and do new things?” Kimle asked.