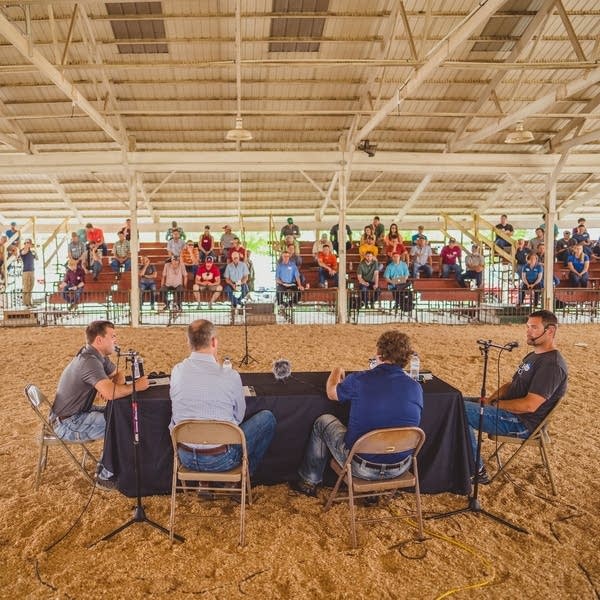 Farmers are justifiably confused about what’s going on with carbon credits. While producers weather some of the harshest impacts of climate change, they watch as other sectors of the economy find ways to make money from environmentally friendly practices. That’s driving interest to get viable carbon markets working for agriculture.

On this episode of Field Work, Zach Johnson and Mitchell Hora explore the roles of finance and government in building the markets. Guests are Cristian Barcan, vice president for sustainability for Rabo Agrifinance, one of the biggest agricultural lenders in the U.S., and Iowa Secretary of Agriculture Mike Naig. The conversation was recorded as part of Mitchell’s Field Day June 3 at the Washington County, Iowa, fairgrounds.

To verify progress, “you’ve got to have a baseline,” Barcan said. He called it a “starting place” for the journey to sustainability. Rabo Agrifinance is working on ways to help pay for the trip.

“We do have targeted financing for solar and dairy digesters,” Barcan said. “But we hope to develop a lot more than that in the future.”

In addition to these pilot projects, the bank is trying to come up with model sets of regenerative practices that farmers could choose to follow.

“If you participate as a client in certain things related to these criteria, you would be receiving certain benefits.” It’s all preliminary, Barcan said, but it’s close.

Why stop at carbon?

Carbon dioxide is a greenhouse gas that traps heat in the atmosphere. Sequestering more carbon in soil is one thing farmers could do to help ease the climate crisis. But what if sustainability itself became an asset?

Mike Naig said that could happen as part of a nutrient reduction strategy like Iowa’s.

“Soil conservation is working in partnership to de-risk the adoption of new practices whatever they may be,” he said. “We may be talking no-till, cover crops, nitrate-reducing wetlands, nutrient management, you name it.”

“We’re growing the same crops, but the soils are completely different,” said Field Work co-host Zach Johnson. How can farmers figure out when and whether to opt into a carbon market, let alone what practices they should try?

“It's more than just check-the-box on cover crop or no-till,” co-host Mitchell Hora said. It’s an opportunity for farmers to create a brand new asset.”

Both farmers emphasized that investing in regenerative practices has to be a business decision. And right now the business looks like the Wild West. Hora said that’s why it’s the right time to reward risk-takers.

“We need to ensure that the innovators are making money out of this,” he said.

Financial incentives should accrue to all kinds of pilot projects that advance sustainable practices. It’s up to policymakers, lenders and farmers  to figure out how to measure, verify and value those practices. But that’s not enough.

“We've got to stack all those benefits,”  Hora said. “We have to ensure that the farm has dollars coming in so that we can reinvest and really continue to push.”

Disclaimer: Rabo Agrifinance is a customer of Hora’s company, Continuum Ag. They are working together on a data-collection pilot project.