How Conservation Saved a Cotton Farmer 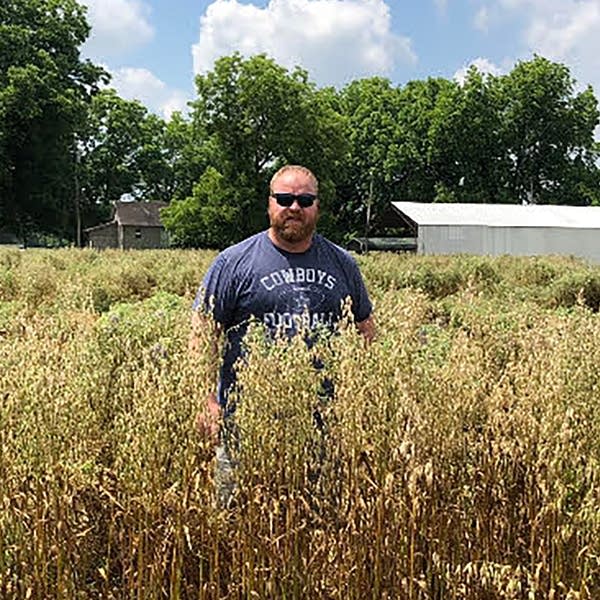 How Conservation Saved a Cotton Farmer

In the second of two episodes about cotton farming, Field Work hosts Mitchell Hora and Zach Johnson talk to cotton farmer Adam Chappell about cotton and sharecropping. Chappell nearly lost his farm 10 years ago to a triple whammy of drought, pigweed and a customer who didn’t pay. He fought his way back to profitability by adopting regenerative practices.

Adam his brother Seth grow cotton, corn, soybeans, rice and livestock in Cotton Plant Ark. Their “change or die” story started when they were staring at bankruptcy about ten years ago. In 2010, their grain elevator went bust and didn’t pay them, a 20-month drought had begun, and worst of all, the pigweed had become Roundup resistant.

“We were killing ourselves financially, trying to control pigweed,” Chappell told Field Work. Chemicals and tillage were not working. He was desperately seeking alternatives. He found one that worked on YouTube. The video was by an organic pumpkin farmer using cereal rye; just pumpkins and cereal rye.

“This stuff was tall as I was, and it was clean,” Chappell said.  I was scraping up any money I had left to buy 300 acres of seed. And that's what we started with.”

That was the first of many decisions that have made Chappell a prosperous farmer and an evangelist for regenerative practices. He says Mother Nature keeps him always learning: he has found ideas for ricing from Madagascar and improved soil health with advice from Australian farmers. Today, he is profitable enough to reduce the acres he rents. He doesn’t need the yield he used to need to make his margin.

“Just forget everything that you know, because everything you know has been told to you by a salesman.” Chappell said. “Don’t be afraid to change.”

Here are a few changes he made on his farm:

Ten years ago, cereal rye made Adam Chappell a believer in cover crops. Since then, trial and error taught him which combinations worked best ahead of which crops.  He told Field Work he tried as many as ten different species but settled on two or three — with black oats a favorite.

“My goals were weed control and roots,” he said. “The depth of rooting was not ever what it was with just one or two or three species at lower seeding rates.” These days, he uses clover and winter peas ahead of corn. He said black oats is working better for cotton than cereal rye did, just because its “big fat wide leaves” leave less ground open for weeds.

Look to farmers outside the U.S.

Cover crops saved Chappell’s business by cutting his herbicide costs, but he still wasn’t making much because GMO seed was so expensive. He was paying $600 for a bag that covered 5 acres. He did better when he switched to conventional cotton. But his light bulb moment came from Australian farmers at a No Till on the Plains conference in 2016. They told him they planted wide row cotton instead of the “skip row” method most U.S. cotton farmers use. When Chappell tried 76”— row cotton instead of 38,” his yield was the same while the cost of seed and fertilizer were much less. Now, Chappell said, when it comes to cotton, wide row is the only way to go.

Chappell is also studying how farmers in Madagascar and Sri Lanka grow rice. They use SRI (System of Rice Intensification) that agronomists in the U.S. are beginning to recommend. Basically, SRI incorporates regenerative practices that reduce irrigation and inputs while improving soil health and yield. “They're making better rice per acre than we are in the U.S. with hand labor and conventional rice,” Chappell said. “It's just arrogant for us to not take direction from countries like that.”

Make animals part of the mix

Chappell got into cattle the way he’s approached most new ventures: Observe, then pounce. In the winter of 2017, he paid bottom dollar for 50 scrawny head, fattened them up on cotton trash and sweet potatoes, and sold them in the spring for four times what he’d paid.  This year he wants to try sheep and maybe build himself some chicken tractors. The goal is integrating everything he raises to help everything else.