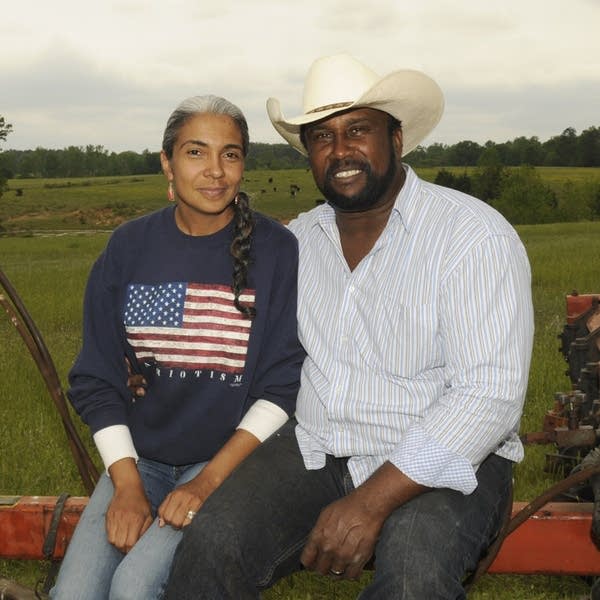 John and Kara Boyd farm 1,400 acres on five parcels in southern Virginia. John heads the National Black Farmers Association, and Kara runs the Association of American Indian Farmers. They told Field Work hosts Mitchell Hora and Zach Johnson they became activists because of their own experiences with discrimination — which drove many farmers of color out of ag.  Meanwhile, they are trying to spread the word about cover crops, no-till farming and conservation.

Their farm is diverse and regenerative. They raise corn, wheat, soybeans, swine, timber and vegetables including radish, peas, asparagus and sweet corn. Kara Boyd is a member of the Lumbee Tribe of North Carolina. She grew up playing in the fields as her grandparents harvested produce.

“Being an Indigenous person here in North America, we've always been growing and producing our food,” she said.

John Boyd Jr. is a fourth-generation farmer. His father’s parents were straitlaced tobacco farmers along the James River and his mother’s parents were sharecroppers who sold bootleg whiskey to make ends meet. Boyd said he learned to farm from their different styles, and he also learned how to read people.

“I have a good take, based on my upbringing, of who's telling the truth and who's shucking and jiving,” Boyd said.

It’s a skill that has served him well. When he turned 18 in 1983, he bought his own farm from another Black farmer. He said he thought the civil rights movement had made things more equal, but he learned quickly that he was wrong. The local Farmers Home Administration agent would see Black farmers only at 9 a.m. one day a week. Everyone called them “Black Wednesdays.”

The farmers Boyd had looked up to were forced to wait their turn all day in crowded hallways where they compared notes about their treatment: being called “boy,” getting turned down for programs. At first, Boyd thought they were exaggerating. Then he showed up for his own first meeting.  Boyd realized the civil rights movement had skipped Black farmers. The agent tore up his application, spat tobacco juice on his shirt.

“Just all sorts of stuff you wouldn’t think would come from someone who worked for the government,” Boyd said.

That experience and others that followed turned Boyd from farmer to farm advocate.. He began collecting stories and statistics. He lodged discrimination complaints with local and national civil rights groups, founded the National Black Farmers Association, led marches, and in 1997 was a lead plaintiff in Pigford v. Glickman. That turned out to be the largest class action settlement the U.S. government has ever had to make.

John Boyd Jr. was at the front of the line. “I was able to get my land out of federal inventory, a little piece of happy change and some sort of apology,” he said.

A 1997 governmental investigation called USDA “a stubborn bureaucracy” that had used discriminatory loan practices to “force minority and socially disadvantaged farmers off their land.”.

Protests and litigation continued because Black farmers had not been notified they were eligible for compensation. Pigford II was finally settled in 2010.

John Boyd Jr. is still president of the NBFA today. The NBFA and its allies in Congress are largely responsible for the $5 billion debt relief for farmers of color in the 2021 American Recovery Plan. In a recent editorial, Boyd said that much more needs to happen.

“The racism that was baked into subsidy programs for decades is now a feature, not a bug,” he wrote.

Meanwhile, he and Kara have a farm to run. Covid hurt. They couldn’t sell their livestock as they’d planned. The long harsh winter meant they were late harvesting and late planting.

“We lost soybeans because we weren't able to get them harvested,” Kara Boyd said. But she noted that as a great source of nitrogen “they’ll just go back into the soil and feed Mother Earth.”

The Boyds would like to do regenerative agriculture demonstrations at their farm, and spread the word about how no-till and cover crop practices are paying off. They’d like to put in perimeter fencing to integrate livestock with row crops. They’d like to see more farmers of color own their land, and they’re working hard to make all that happen.

Photo of the Boyds courtesy of Fred Watkins