Carrying the Conservation Torch: A New Generation Advances the Cause 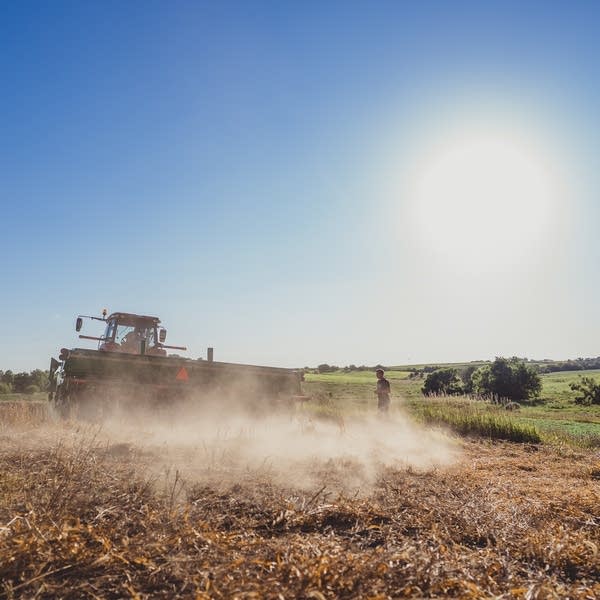 Carrying the Conservation Torch: A New Generation Advances the Cause

By Mike Langseth and Amy Mayer

Young farmers coming back to a family operation often have to tease out a place for themselves with hard work, creativity and an entrepreneurial zeal. For Trent Stout, that meant taking on the family seed business and expanding it from being a local corn and soybean dealer to being the go-to regional source for diverse cover crop seeds. Michael Vittetoe brought cattle to the farm as an integral part of a rotation that relies on cover crops. He might just fold chickens into the system, too. Hosts Mitchell Hora and Zach Johnson hear how some younger farmers are making conservation their part of the family business.

When Vittetoe started grazing cattle in the prime corn and soybean fields of southeast Iowa, he may have been bucking the trend, but he was also carrying on a family conservation tradition. While it’s weird to think of a chisel plow as a conservation tool, Vittetoe said, his grandpa was one of the first guys to ditch the moldboard plow and adopt the chisel plow.

As new ideas and new technology developed, Vittetoe’s grandfather continued to experiment, and with the help of Michael’s father, went no-till in the 1980s. The change was a success, and they have been no-tilling ever since, but the earlier generations of Vittetoes were not content with no-till alone.

Even with their long history of no-till, erosion was still an issue on some of their hillier land, and 7 to 8 years ago, the Vittetoes tried growing a cereal rye cover crop to help hold the soil in place. They liked the effects of the cover crop so much that they are now growing cover crops on all of their acres as a part of their regular rotation. They have expanded beyond cereal rye and into diverse cover crop mixes.

This is when Vittetoe got his wild idea to get some cattle. He was looking at a cover crop mix growing alongside his corn.

“I was able to see how everything kind of played together and just see what kind of forage production potential some of this ground has” he said. “And that’s what essentially got me convinced that I needed to start from scratch and get the livestock integration going.”

Since he was starting with zero fence and zero experience with cattle, Vittetoe started small, with just 5 head in 2018. He chose the Belted Galloway breed because they are bred to produce high quality beef from forages, and because they are cool looking. This cool factor has helped his direct marketing efforts. “People see them and they’re like ‘Oh, I love your Oreo cows!’”

As of last summer, Vittetoe’s herd had grown to 33 animals, with plans to continue expanding.

Like the Vittetoes, the Stout family has a long history of conservation in Washington County, which helped Trent Stout find his place. When he was ready to come back to the farm, he already had two brothers working full time in the row crop operation. His dad had started Stout Seed in the 1990s and extended a somewhat tongue-in-cheek offer.

“Oh, you want to come back and be a part of the farming operation? Here's this seed business I'm running out of my garage,” Stout remembers his dad saying. “If you want the keys to that palace, let's start there.”

The younger Stout found running the seed business was a natural fit for him so he started looking beyond the bread-and-butter of corn and soybean seeds.

“Bringing cover crops in was like one of the first steps that we did once I came back,” he said. “And it was just because it's something that I'm very passionate about.”

He had done a lot of reading and in 2012 renewed interest in cover cropping was starting to take off well beyond Washington County.

“It wasn't any magic pill that we took or anything,” Stout said. “It was just going out and having conversations and being present and trying to see what guys needed. And we just evolved from there.”

“Trent is like a cover crop wizard now,” said Field Work host Mitchell Hora. Indeed, if you Google “Stout Seed” today, “cover crop dealer” comes up. Stout Seed offers a wide range of cover crop seeds to a large network of dealers and customers. Echoing others in Washington County, Stout notes that farmers looking into something new need examples and advice from others who have already tried it. Now as one of the people many farmers turn to for cover crop advice, Stout says as important as clarifying your agronomic plans and your economic options is managing your expectations.

“Start small with your expectations,” he said. “Start small with what you want to get accomplished.” After an initial experiment, he says farmers can evaluate how something went and make adjustments, without losing too much in the effort. When someone starts out too grandly, he says the risk of giving up after one year of disappointment is higher. And he said that while profitability is always top of mind, it doesn’t have to be the one variable driving everything each year. Water quality, soil health and other benefits are associated with cover crops.

“There are other things that may be building blocks to get you to that overall profitability level on your farm,” he said.

For his family, like the Vittetoes and others in Washington County, investing in conservation over decades has brought plenty of returns.