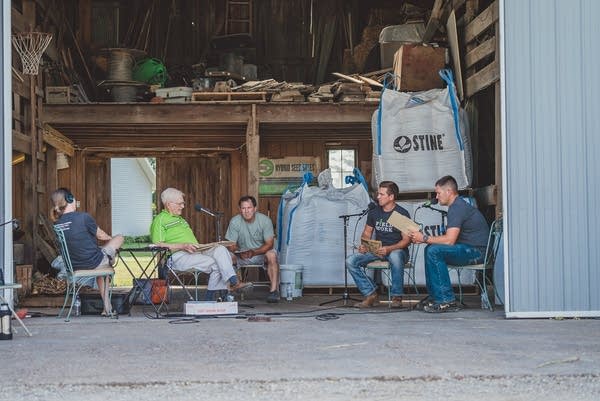 In the first episode of our special Washington County project, Zach and Mitchell talk with an Iowa treasure and one of the people most responsible for cultivating the county’s conservation culture: Jim Frier, the former Iowa State University extension director in Washington County.

The extent that farmers use conservation practices such as cover crops and no-till varies greatly across the Corn Belt. The story of Washington County’s conservation culture owes a great deal to Frier’s efforts. Now retired and in his late 80s, Frier took the extension job there in the 1960s.

In 1965, he wrote a three-page article for the Soil Conservation Service annual report headlined “Conventional tillage Systems. Are they out of date?”

“I was a little bit ahead of my time thinking about tillage, there, when I wrote that article,” he said when he sat down for an interview with Zach and Mitchell last summer.

He also recalled how the first farmers to attempt reduced tillage got ridiculed in an environment where plowing contests were still an annual event. But he was curious and he saw that getting farmers together to see what other people were doing fostered creativity and collaboration. He started holding “twilight meetings” about conservation on summer nights in the early 1960s.

“We'd have the farmer show what he did. And we’d generally have an area specialist, once in a while, the state specialist, down,” Frier said. “I arranged it. I promoted it. I wrote hundreds of articles, I took lots of pictures.”

At first, terraces were the new thing.

“Twilight meetings were well attended,” Frier remembered. “We would get like 20 to 40 people out and it would be the neighbors that knew that this farmer was trying these things and he'd had some success or maybe he had some failures.”

Equipment companies came along, eventually manufacturing the right parts for seeding into last year’s residue and making it less onerous for the farmers who often had been engineering their own solutions. One thing led to another.

“We had a number of farmers who were willing to take risks and experiment,” Frier said.

By the 1980s, Frier’s paper records show many farmers were using no-till with corn and his meetings and field days in Washington County were attracting farmers, students, and agribusiness representatives from farther away.

“When soybean people started trying no til soybeans, that exploded,” he said. “The equipment needed is not as complicated. You didn't have as much trash to work with. It was very interesting and exciting.”

The people who were early adopters of no till, he said, were willing to take other risks. That led to interest in cover crops, a practice of keeping roots in the soil during the off-season to keep soil and nutrients in place.

“I thought it was crazy, as an extension director,” he said, “I didn't think it would work.”

Today, Washington County is a leader in cover crop acres, and young farmers there are in the vanguard of other sustainable agriculture efforts. As before, it’s taken collaboration, creativity and innovation to make new practices viable on the field, but unlike some other areas, Washington County’s farmers have this legacy of conservation culture to bolster their work.

“I felt like I was a part of a revolution that was taking place,” Frier said, “and I had a small part in it.”

For more on what Zach and Mitchell learned in Washington County, Iowa, check out the video Zach made, as well as a blog post he wrote about the value of networking there.