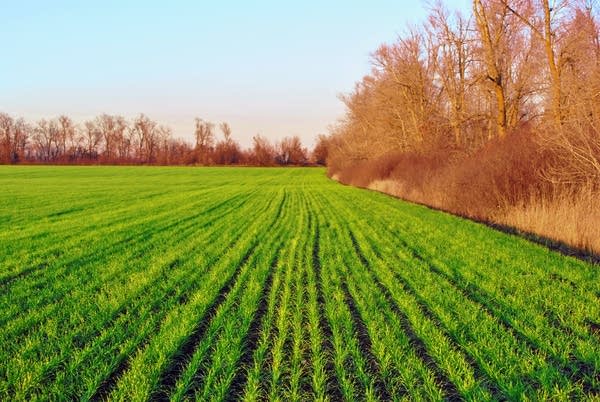 A number of states in the Mississippi River watershed have been trying to figure out how to reduce nutrient runoff, and edge-of-field practices are often a key part of their strategies. So what are these edge-of-field practices? And should farmers be investing time and money to install them on their land? Farmers Zach Johnson and Mitchell Hora explored those questions with Iowa State University’s Amy Kaleita and farmer Mike Ehlers on the “Getting Edgy” episode of the Field Work podcast.

“Edge-of-field practice’ is an umbrella term for “something that intercepts water that's going to be leaving the farm field, and then has some technology or some biology in between the farm field and wherever that water goes next,” according to Amy Kaleita, a professor in the Iowa State University Department of Agricultural and Biosystems Engineering.

If a farmer has a creek running along the edge of one of their fields, “then [they] should be looking if [there is] surface flow that runs across the ground and then into that creek,” Kaleita said.

If that’s the case, a buffer will reduce nutrient runoff into the creek. Buffers are densely vegetated strips that might be made up of deep-rooted grasses, trees, and shrubs. As water runs off the farm fields, the buffer slows it down. As it slows, sediments deposit out, along with the chemicals that tend to stick to the sediment.

If there is both surface flow runoff and a tile system, then the most effective practice might be a saturated buffer. The saturated buffer will route the flow of water from the tile system through the subsurface of the buffer, where the plant roots will filter it before it leaves the field.

Tile drainage systems also can also work well with a bioreactor. It’s an underground woodchip filter that is installed at the outlet of a tile system. The wood chips create a microbe-friendly environment, and when the drainage runs through the bioreactor, the microbes denitrify the water. They can typically filter the water leaving a 30-80 acre tile-drained field.

Iowa farmer Mike Ehlers installed a bioreactor on his farm in 2018. The installation crew dug out a trench, 50 feet wide by 100 feet long, then put in a liner and dumped in semi-loads of wood chips. Afterwards, they covered up the trench and reseeded the grass.

Ehlers, who grows corn and soybeans and raises pigs on his 2,000 acre family farm, expects his bioreactor to work as a nutrient filter for at least a decade before he needs to replace the wood chips. So far, water testing has shown that his bioreactor is effective. The nitrate level of the water leaving his tile system is often at .5 parts per million, which he said is “as close at nitrate free as it can get leaving the farm.”

It’s difficult to measure the impact of nutrient runoff from a single farm. But the collective runoff of nitrogen and phosphorus from farms across the Midwest into the Mississippi River has been shown to contribute to the Gulf of Mexico ‘Dead Zone'. Excess nutrients running into the Gulf cause rapid algae growth, which robs the water of oxygen and kills aquatic life. While the dead zone has occurred naturally for millennia, it has grown dramatically since the arrival of production agriculture.

“One of the things that has changed since thousands of years ago is that it used to be that our landscape was really dominated by kind of long-term perennial crops and now it's really dominated by short term annual crops,” Kaleita explained. “So we have a lot of the year where there is not very much nutrient uptake happening on the landscape because we've got fallow fields with nothing growing on them.”

Environmental advocates and the federal government are both concerned about the Gulf of Mexico Dead Zone. To Kaleita, that should be enough to motivate farmers to adopt edge-of-field practices. “There's a lot of pressure on this system,” she said.

And, she noted, political winds are pushing towards adding additional water quality regulations.

“The more voluntary sign ups we get, the less finger pointy that situation is. [It’s] a good investment in community relationship building to have some of these edge field practices.”

Ehlers, for his part, is glad to have his bioreactor in place, regardless of the politics.

“We farm with a mindset. We want to leave the ground better than we found it. And the practices that we've implemented are our ways of doing that,” he said. “We live here and we want it to be good water.”

After all, the water that filters through the ground that he farms ends up in his family’s well.

“So we want to do a good job, not just for everybody downstream,” he said, “but for ourselves, too.”