What's So Amazing about Grazing? 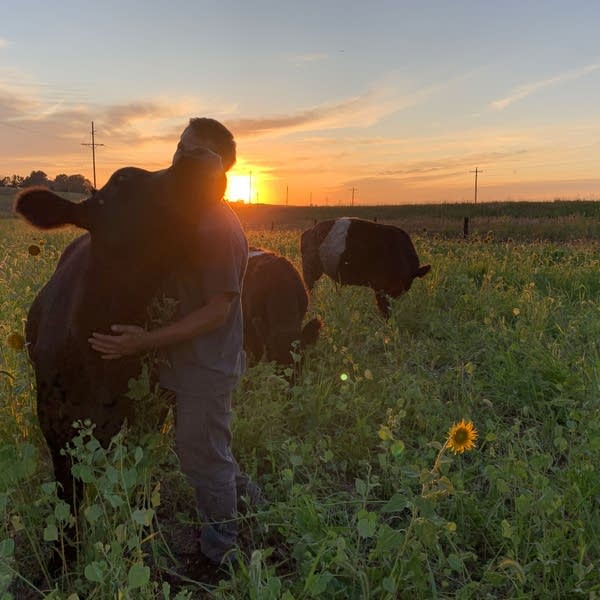 What's So Amazing about Grazing?

If you’ve ever heard about the regenerative agriculture movement, you probably know that its proponents believe livestock plays a big role in it.

When Michael Vittetoe originally heard about livestock integration, he was skeptical. As a row crop farmer in Iowa, he had no experience working with livestock, nor any fencing set up for such a type of operation.

“Being a row crop guy, the idea of getting livestock back out on the land was taboo,” he said. “You just kind of brush it off like, ‘That'll that'll never happen, we're not going to do that.”

But as he learned more about soil health, he kept hearing people talk about rotational grazing.

The idea is to graze livestock on taller cover crops for a short period of time. The animals eat, trample, and relieve themselves onto the cover crops, which helps to retain cool temperatures, moisture, and put essential nutrients back into the soil. After a short amount of time, the animals are moved to a new field to do the same process.

Still, it wasn't just the taboo part that was daunting. Starting a big operation from square one means lots of time and money before making any returns.

Then in early 2018, Vittetoe found himself talking to Gabe Brown, a pioneer in regenerative agriculture, during a Soil Health Academy visit. By the time Vittetoe left the conference, he’d decided to buy cattle that summer and use the animals to help regenerate the soil.

Gabe Brown’s message also reached Dave Scott, a former dairy farmer in Whitehall, Montana. In 2003 Scott and his wife sold their cows and bought 200 ewes. Scott heard Gabe Brown and Christine Jones speak at a conference, where they made the argument that livestock producers don’t need to use nitrogen if they can get their soils to work for them.

Scott was able to decrease his nitrogen inputs 100% over the course of four years, while simultaneously increasing his grass production to seven tons per acre from six.

“The sheep are where a lot of that nitrogen is now coming from,” he said. “Actually, when a cow or ewe or any herbivore eats grass, 70 to 80 percent of what they eat goes out the back end. And, in terms of nutrients and minerals, all we're doing is recycling those nutrients through the sheep and then back into the soil.”

And that feeds microbes. Additionally, the increased soil health has allowed for slower infiltration of water. Keeping the biomass of cover crops on the soil allows for higher water retention during the hotter times of the year. All of this contributes to a longer irrigation cycle, allowing Scott to cut down on irrigation labor and costs. By cutting nitrogen and irrigation, Scott has been able to save $300/acre.

The biggest benefit for Michael Vittetoe in Iowa is the ability to put multiple enterprises on one acre, even though he’s only devoting a small amount of his acreage towards his livestock. He’s not only seeing improved soil health, but an opportunity to grow his grass-fed beef business after a couple of years experimenting.

And that’s actually his main piece of advice for farmers on the fence.

He said you can start with just a couple, and figure it out.